How to Handle - iPhone, iPad and Android App - Part 1

The difference between the two major players in the smartphone market can be summarised as follows: Google sells advertising, Apple sells hardware.

Neither approach is somehow more morally pure, but it is a useful reference point from which to establish how the retail model works in each case. More interesting still, Google and Android are increasingly separate entities. As Charlie Kindel writes in a recent Guardian editorial:


“Android is not Google and Google is not Android. Android has become something that is independent of Google (or anyone else, for that matter)”

Kindel argues that Google has lost control of Android – ceding almost all of the Android operating system to the mobile phone network carriers. This is one reason for Android’s popularity, but also makes it increasingly difficult to deploy a consistent user experience across all the tiny variations possible in the hardware.

How to understand Apple and Google and others

Let’s take a look at the context in which your app will exist on the different smartphone OS platforms. Many successful apps exist on multiple platforms, so it’s not always a simple matter of picking your OS and sticking with it. Small developers, like Marco Mazzoli, maker of the app Spirit, have found profit on both iOS and Android.

Although Google is clearly ahead with share of the smartphone market alone, Apple also make iPads and iPod touches - both of which also use apps. There is also a disparity between the two companies’ volume of available apps. Apple also makes the most cash. While Google Play accounted for 51% of all downloads the Apple App Store made 74% of all profit – $1.6 billion. But even these numbers are misleading, implying that developing for Android will reap you merely 26% of the money you would have made on iOS. In fact, the reality is much more chilling. According to the investment banking firm, Pipar Jaffray, Android developers earn a paltry 7% of what the Apple Store earns for iOS developers.

Apple derives the majority of its revenue from getting paid by mobile carriers. For every iPhone sold, Apple receives approximately £100 ($150) from the carrier, upfront. This is in addition to the profit from the hardware itself. This means Apple operates a very different model from previous mobile phone manufacturers, ceding very little control to the carriers, preferring to keep a firm rein over the phone software.

Google CEO Eric Schmidt built Android around the idea that users would be keen to accept free phones in exchange for watching adverts on the device, and that this process would disrupt the traditional carrier model – the intention being that Google would dominate mobile search, as it had done with search on the desktop.

Interestingly, Google makes the majority of its mobile search profits from iOS devices, not Android, but the company is keen to change this. Google has little to no control of the Android hardware market and this has caused fragmentation of the hardware and software. A consistent user experience on Android has not yet been established.

The Android platform is jam packed with free apps – making it very hard to turn a profit, at least at the moment. In fact, it’s estimated that although 14% of app downloads for iOS are paid, just 1% of Android downloads are. Android is a fascinating platform, provided you have the resources to deal with the hardware fragmentation (the hundreds of different handsets available, each with different quirks) and the lower profits. Most first-time app developers will probably want to opt for the Apple model, at least to begin with, and then use any money they make to fund an adventure into the wild west of Android. 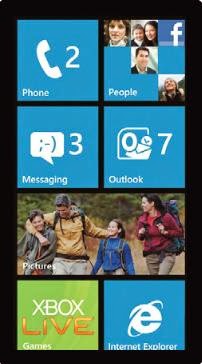 Microsoft generates a huge amount of its smartphone profits from Android. Yes, you read that right.

Microsoft receives royalties from Android phone manufacturers because the Android OS uses Microsoft patented technology. However, Microsoft is keen to establish its own Windows 8 smartphones as an alternative to Android. Unfortunately, the mobile phone carriers are now wise to what Apple did to them – wrestling control over the hardware from their hands – and will not let Microsoft pull the same trick.

Microsoft has a bunch of existing software products it can use to popularise its new platform, not least Office, and the company remains the great unknown in the smartphone marketplace.

It’s too early to predict whether Windows Phone 8 will represent a worthwhile investment of time and energy for app designers.