The risk for independent designers

Working on personal, independent projects is the most exciting kind of app design. It is also the riskiest. Many of the earliest mobile app designers were hobbyist programmers, working out of their bedrooms. Unbelievable though it might seem today, most big software companies were slow to show interest in smartphones, and later mobile tablets. Early on, the mobile marketplace stores were a haven for small developers – a playground for the idealistic, reckless, and brilliantly deranged, It was, back then, relatively easy to eke out an impressive living on the new platforms. Today though, the world of mobile apps is a considerably less hospitable place for the indie developer. As the number of applications has grown, and the number of major companies involved in app production has increased, competition has become fierce. Powerhouse publishers like Rovio ( Angry Birds ) and Zynga ( Words with Friends ) have production budgets that eclipse those of the console developers, with a revenues in the millions.

However, the smartphone app stores still remain the most egalitarian retail outlets in the world. If your idea is genuinely great, you have a very good shot at making a return on your emotional, intellectual and financial investment. Unlike any traditional retail network, where a middle-man must be convinced to stock your product, there is no gatekeeping of mobile apps in the traditional sense. As long as your app is not offensive or damaging, it will be allowed into the mobile app stores and sold alongside thousands of others. This is as near to a meritocracy of products and ideas there that capitalism has yet to produce.

Let’s take a quick look at the everyday reality of selling apps, using iOS as an example. We know that Apple has paid out over $9 billion to developers so far, and that as of 2013 the US App Store contains over 800,000 apps. There are estimated to be at least 228,510 publishers on the store and the average price of an app is currently $1.44. From this, we can calculate that a crude average of between five to ten thousand dollars is generated per-publisher in the space of a year (ignoring, for the sake of simplicity, the exponential growth of developer sign-ups, year-on-year, and the effects of free apps with advertising revenue, and assuming a uniform distribution of revenue). In reality, revenue distribution is heavily weighted towards the very top apps. Huge swathes of developers make much, much less than this average.

So far in 2013, it has been calculated that over half of all the hours users spend using mobile apps are spent playing games. This trend is reflected in the charts of both iTunes and Google Play. The top ten apps are dominated by games. This would suggest that indie developers should seek to concentrate on this genre, but the problem is that gaming is not just the most profitable category, it is also the most over-subscribed. You’ll be competing against some seriously formidable companies and high-budget apps developers. Take a look at games like Infinity Blade or Grand Theft Auto. This may be the direction the mobile games market is heading in, presenting the possibility that it could become harder for one-man operations to succeed.

Luckily for you, the latest data does not suggest this is necessarily the case. Flurry analytics recently observed that, although indie game companies’ share of the games market shrunk from 60 to 56 percent in 2011, that share has grown again in 2012 and into 2013, reaching a blazing high of 68 per cent during that period.

The slump two years ago was attributed to “a wave of consolidation by established game companies who acquired independent studios (e.g., EA acquiring Chillingo, Zynga acquiring Newtoy, DeNA acquiring Ngmoco and Gameview, etc)”. It would seem, for the moment at least, that indie developers, like you, are in a good position to seize the opportunity to create a hit game. Gaming aside, there are many other popular categories of app. Again, the data collected on this will help you decide where to focus your efforts. However, we don’t advise building an app in response to statistical analysis like this. You can’t build a hit app by focusing on these numbers alone - you must also pour love, belief and sweat into your design. A break-out app can occur in any category, propelling a developer to unpredicted fame and fortune. 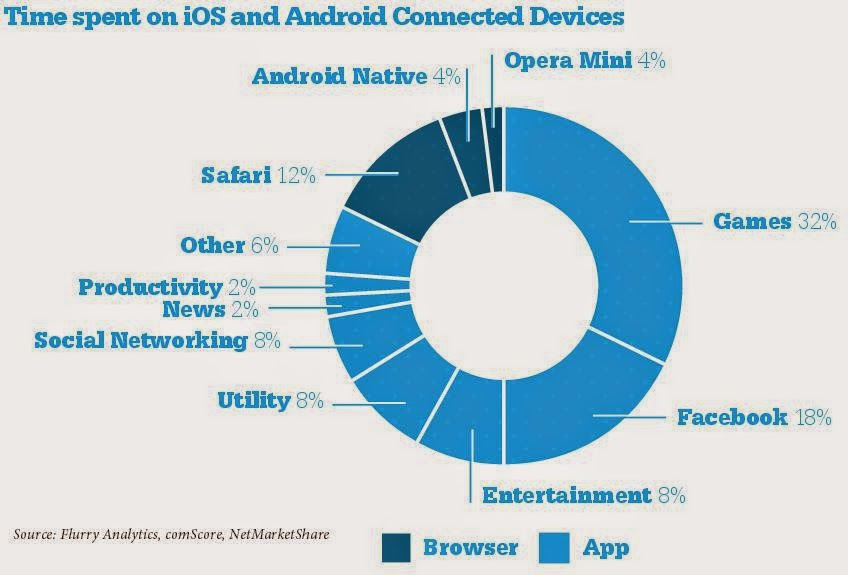 How to motivate yourself

Only take on projects you love. Don’t do client work, and don’t follow the money; we follow the passion. What the prevailing consumer-capitalist narrative fails to understand is that careful, well-loved work, resonates with the public in a way that a profit-driven effort never can. Real success, and mobile app profit, comes from careful, visionary and meaningful effort.

Just one of the apps we built, Alice for the iPad has over 500,000 installs, appeared on Oprah and in Apple commercials worldwide. The app was designed in my bedroom and we spent exactly zero pounds marketing it. Trust your vision. Along the way check-in with yourself and ask:
Am I proud of this work so far?

If the answer is yes, then you’re doing it right.