Deciding between platforms: iOS or Android 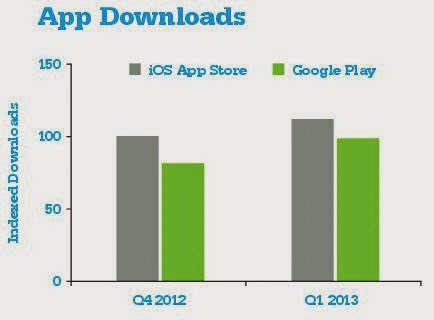 There exists a long-running platform rivalry between Android and iOS. There is an argument that Apple exerts excessive control over the App Store. There is some truth in this, but not much. Developers have found their apps pulled from the store or denied entry if they violate the terms set out in Apple’s guidelines, but the reality is that your app is unlikely to be rejected during the review process and, usually, when it is, a few changes will render it acceptable to the reviewers. Although it is less widely publicised, Google will also pull apps from Google Play if they violate the terms of service. However, their guidelines are – on paper at least –more tolerant than Apple’s.

Both Apple and Google automate the payment process. As a developer, you submit an application to become a developer and, once accepted, the companies provide daily itemised lists of the app purchases your customers have made. Google delivers app-sales data in real-time, as opposed to Apple’s nerve-wracking 24 hour doses of sales-data. (Apple only allows app purchases through their official store, although a few rival stores, like Cydia, have sprung up. But, the majority of users have no idea stores such as Cydia exist, and we would recommend avoiding the confusion and potential controversy of operating outside the App Store.)

Until last year, Google allowed app customers a variety of payment methods that were not Google-sanctioned. But, recently, in an effort to improve the profitability of Google Play, the company has been encouraging developers to use Google’s own payment system. As Reuters reported:

“Google warned several developers in recent months that if they continued to use other payment methods — such as PayPal, Zong and Boku — their apps would be removed from Google Play.”

This change, among others, means that the Google Play marketplace is becoming increasingly like the Apple App Store. This makes it easier for developers to automate their payment systems. Once you are set up in either app store, day-to-day administration of your apps is surprisingly easy.

Show me the money 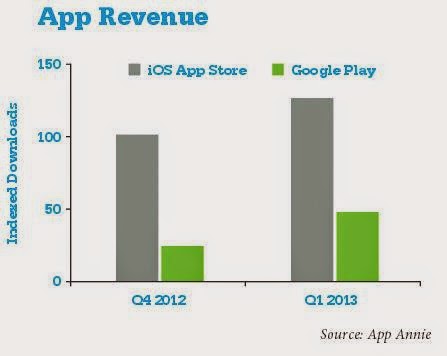 One of the biggest questions an app designer has when considering iOS or Android is:

Which platform will make me the most money from my app?

The answer, for the moment at least, is unequivocally iOS. There are over 500 million iOS devices out there (iPhone, iPod Touch and iPad sales combined), and Apple has the largest credit-card number reservoir in the world. Although Google does not provide precise sales data, at the beginning of 2013, Android accounted for up 70 percent of the smartphone market according to IDC’s, while iOS held 21 percent. These figures might suggest that Android is the market to target, but in fact iOS will give you access to the largest number of paying customers: As of 2013, Android is sold on more phones, but relatively few users buy apps for Android devices. Mobile developers take 85% of their profit from iPhones, and just 15% from Android phones. The iPad alone is outselling every PC made by any major company: HP, Dell, you name it.

However, this is not the end of the story. Some app designers are making a lot of money on the Android platform and although you’ll make less money on Android, on average, you should not discount it.