Back to -  iPhone, iPad and Android App Platform Consideration - Part 1

With Android phone sales amounting to 70% of the market, as opposed to the 21% market share for the iPhone, it seems peculiar that so many apps are released only for the iPhone. The reason for this is that the situation is more complex than raw sales data suggests. In reality, the raw sales figures on Android devices are somewhat misleading and developers find that iOS device owners spend more on apps, more often.

Six years ago on June 29th 2007 Apple released the first iPhone. Since then, the iPhone has seen five updates and its success is arguably unprecedented. As of March 2013, Apple had sold a stunning 218 million iPhones.

For now, it makes the best economic sense for you, as an app designer, to focus your efforts on launching a paid app on iOS and then, later, once you have the financial security of a successful iOS app, to consider gambling on Google’s platform.

In the first quarter of 2013, the Apple App Store mustered up over $1.48 billion, or 74% of all revenue in the mobile apps market, while Google Play accounted for just 18%. This means that Apple users make up a overwhelming proportion of mobile app revenue.

So, although Android phones outsell iPhones, developers still prefer to write for Apple first. It is also important to consider that, when you write an app for iOS, you are not simply writing it for iPhone owners, but also iPod Touch and iPad owners – two huge markets that Android phone sales statistics do not take comparative account of.

Google’s executive chairman Eric Schmidt was convinced things would be different for Google. Back in 2011 he told an audience:

“Android is ahead of the iPhone now. Ultimately, application vendors are driven by volume, and volume is favoured by the open approach Google is taking. There are so many manufacturers working so hard to distribute Android phones globally that whether you like Ice Cream Sandwich [the 4.0 release of Android] or not... you will want to develop for that platform, and perhaps even first... ”

Sadly, for Google, 2013 has turned out to be very different indeed.

Although the raw number of Android phones sold has continued to grow and despite Android being installed on 70% of mobile smartphones sold each quarter, the big money is still with iOS and few developers are willing to risk the expense of developing for Google’s relatively unprofitable platform. For every ten apps hat developers build, roughly seven are for iOS,” according to app-trackers, Flurry.

iPhone users are prepared to pay for apps, while Android users, largely, are not. Since Apple started selling apps, iOS developers had been paid a total of $9 billion – Google refuse to release comparable data. It is estimated that a developer who got $1 on the iTunes App Store would get $0.24 from Google Play. This makes Google Play a tough place for you to do business especially if you are developing on a low budget, or working on a project that aims to make a profit. Developing for Android is more often a personal choice than a commercially viable option. The increased profits to be made on iOS make programming for Android a luxury that few developers can justify.

Nevertheless, if you choose to use an advertising-funded model for your Android app, and are convinced that your design has wide appeal, you can make substantial sums of money on the Android platform – it’s just considerably harder. New developers will have more luck coding first for iOS and then using the profits from that platform to consider experimenting with Android. You couldn’t have picked a more exciting time to
begin your adventure onto this new platform!

Percentage of developers ranking each platform top, among developers using both Android and iOS 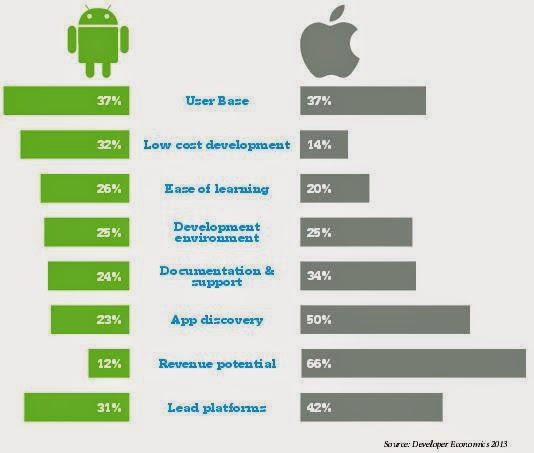