Tablets, in particular the iPad, are an immensely popular new platform with consumers. The marketplace for these devices is exploding. However, it’s important to recognise that there is a big difference between designing apps for tablet-sized screens and mobile phones. Just scaling your interface will not cut it. The ergonomics of a tablet are radically different from those of a mobile phone. Take a look at the finger placements in the diagram below. The reach patterns on a tablet are different, depending on how the device is held. As a touch-screen increases in size, the usage pattern changes.

Rather than bewilder you with a complex theory of how a tablet-interface should be designed, these diagrams are provided to illustrate two important points:

1. You must test your designs with real users
2. You must not assume that a mobile phone app will scale well to a tablet.

This is rarely, if ever, the case. Observe the hand and finger positions of your users when they interact with
your app:

Do they look efficient and comfortable? 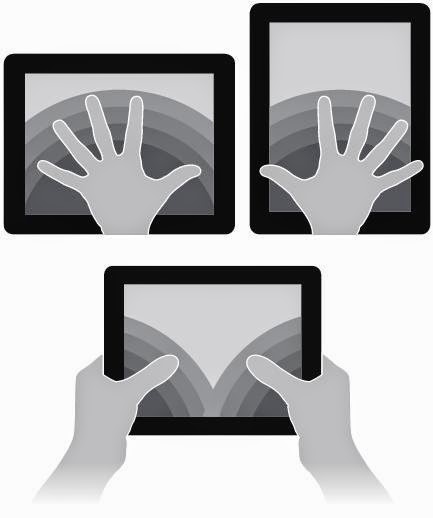 Newcomers to the app-design world often overlook an important feature of these new mobile devices:

They can be rotated 360 degrees, from portrait to landscape, both ways. As a result, the on-screen interface must adjust itself to the new orientation. Of course, you could elect to present your app in a fixed orientation, so that the screen does not react to rotation. However, generally this is a poor solution – most users will expect the interface to react. Both the Android and iOS SDKs make provision for rotational interfaces. You may also find, in the case of iOS that Apple may reject your app if it does not re-orientate itself when the device is rotated. There are logical exceptions to the rule. Alice for the iPad is just one example of an app that would not function properly if it re-orientated itself on rotation. But, with utility apps in particular, you should make every effort to have a fully-rotational interface.

Far from being a troublesome extra step in the development process, the rotational ability of modern mobile devices makes for some wonderful opportunities to explore new interfaces and sell more copies of your app. 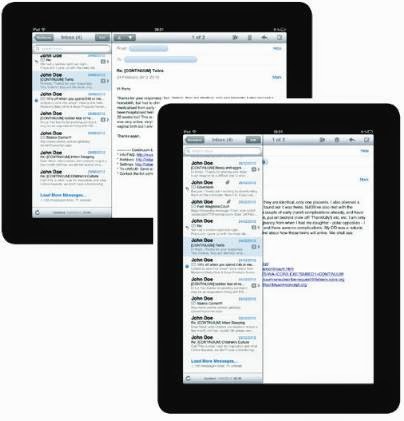 Consider this Mail app, which provides different organisational systems depending on which way round the device is held.

Read Back to iPhone, iPad and Android App Platform Consideration - Part 1
Posted by Eseong at 4:13 PM